The water salinity of a solution is the equivalent concentration of pure Sodium Chloride (NaCl, or common salt) poured in distilled water that would yield the same electrical resistivity response (and conductivity) as the original sample.


Formation water salinity in the effective pore space is the major driver of electrical conductivity of a rock (together with clays that may be present in clastic matrices; and occasionally pyrite FeS2). Hence, the sample's equivalent water salinity in parts per million (PPM) of NaCl, is related to the water resistivity Rw that appears in the classical water saturation equations of Archie, Simandoux, Indonesia, and Fertl.


Once a representative and reliable non-contaminated water sample from a reservoir is taken, it is usually sent to a lab to conduct a water analysis to find the ionic composition of the formation water. GeolOil petrophysics software ships with a module to compute the equivalent water NaCl salinity from the ionic concentrations in PPM or mg/liter: 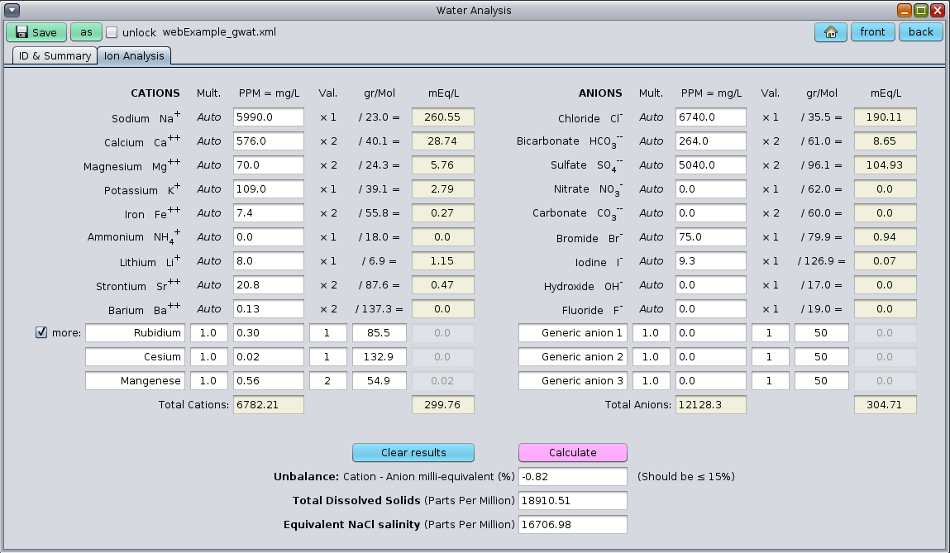 
Some remarks deserve be mentioned from the picture above:

→ When water analyses are got, is essential to assess the quality in terms of:


⚠ WARNING: All log resistivity curves —no matter how good work did the logging service company— can face both space representativity and time representativity issues: Is the interpreted zone in an isolated compartment? How early was the well SPUD date and logging date? If such date happened several years after discovery, the resistivity curve would represent the measure related to depletion, water advance, and perhaps contamination due to injection process (if any). In those cases, any SW model would not be suitable for initial volumetrics or to initialize a simulation process. Consider then a SW model based on capillary pressure height. ∎


The more ions has a water solution, the more conductivity (easier to conduct electricity) and hence less resistivity Rw. The following tables summarize the relationships between common rock parameters:

How SW, SO and SG change as a parameter increases


How SW, SO and SG change as a parameter decreases


Water salinity computation from ionic water analyses is perhaps the best technique to estimate the equivalent NaCl salinity and its companion Rw at the reservoir temperature. However, there are other techniques that worth a try. The table below summarizes the most popular techniques to estimate either salinity or Rw, orderer from the most reliable to the less:


Usually, the deeper the reservoir, the larger geological time it has had to dissolve minerals into ions, and the saltier the reservoir. It is quite common to find reservoirs with relevant differences of salinity for different formations. Hence, it is an advisable practice not to describe a reservoir by a pair of values Rw and Temperature, because Rw varies with temperature within a solution of constant salinity (and temperature also varies with depth). It is preferred to describe the reservoir by a distribution of salinity per formation (like a layer cake), and occasionally salinity has to de described by a full 3D behaviour. That is, salinity = f(x,y,z).


Given a known reservoir temperature, salinity to resistivity Rw conversions has a one to to one correspondence that can be easily handled with GeolOil Software: 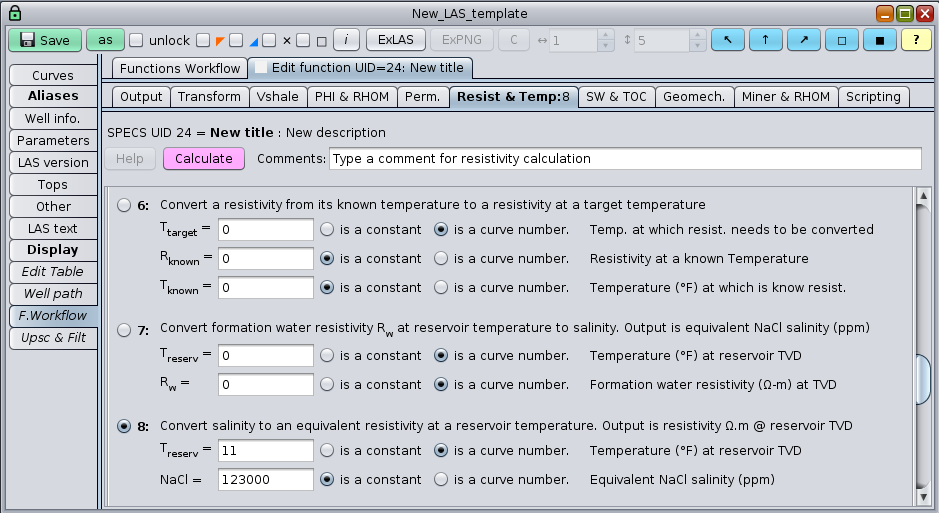 Conversion functions between salinity and Rw

Conversion functions between TVD and temperature


We recommend the following methodology to build a 3D model for the formation water resistivity Rw = Rw(x,y,z):