By: Oscar Gonzalez, GeolOil LLC. This paper was first published on September 2020 on the website geoloil.com


Vshale (and not Vclay), is what is normally estimated in well logging. In a stratigraphic column —particularly in clastic environmets— it is common to find pure shales (100% VSH sediments). Those shales are tight rocks (say sealing, with permeabilities in the range of nano-Darcies), that are built mostly of clays, and minor proportions of tiny hydrogen free silt size particles (up to around 0.06 millimeters of "rock dust"), with quartz (SiO2) and some lithic minerals like feldspars and plagioclases.


A typical pure gray shale rock, usually contains 65% of clays or more (like illite, smectite, chlorite, and kaolinite). Shalines or clayness indicators derived from gamma ray, and hydrogen neutron-density porosity, respond mostly to the presence of clays, not to the presence of silt particles —clays trap traces of GR emitting minerals, and clays have hydrogen in their chemical formulae—


That maximum indicator response detected on a pure shale, does not mean that the shale is built 100% only with clays (even mudstones and claystones are not 100% clay). The maximum signal of the indicator is related to a maximum of 100% shale sediment that has blends of clays and silt, seldom a maximum of 100% of clay.


Unless a rock body with almost 100% of clay content is found to tie to a log indicator, there is not normally an easy way to estimate directly Vclay, nor to differentiate what is silt and what are rock grains. They have the same non-clay minerals: they only differ in their size. To estimate Vclay, a companion independent piece of information is needed. On way is to access lab data:

Many shale rocks have pClay > 0.65. —like the top one from the photograph below— That is, pSilt = SILTprop < 0.35. GeolOil defaults pSilt=0.25 and pClay=0.75 for many of its internal equations and mineral solvers. You are welcome to replace this default value with a custom lab measured one, or even use a pSilt(z) LAS curve on its own right instead of a constant.


The following table shows an example of an XRD lab result proportions of the gray shale from a shallow, clastic fluvial environment, shown in the top zone of the above photograph, on regular light.


The top zone is a classic pure shale, so VSH=1.0, and VCL = pClay * 1 = 0.83. In spite that pSilt=0.17 >0, the silt size particles of quartz and feldspar are so tiny that still conforms a perfect seal that stopped oil upward flow migration (and also has a fully impregnated irreducible water saturation that traps the formation water, so SWt=1.0 and SWirr=1.0 in the shale).


The bottom zone of the photograph, is a shaly sandstone (0 < VSH < 1, far to be a clean sand), in which the oil resides (the black stain in regular light indicates oil). By gravitational segregation, the oil tries to flow upwards (because oil is less dense than water), but the shale above blocked the migration, conforming a reservoir trap.


This shaly sand needs a VSH adjustment to properly estimate its water saturation. 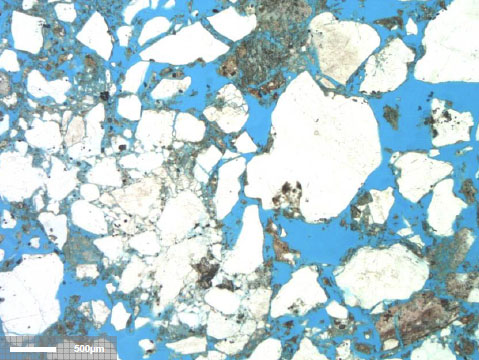 Thin Section of a core at a low magnification


A TS Thin-Section photograph from an optical microscope, of a moderately clean sand from a braided channel system. Its VSH is around 20% approximately for the whole rock. The blue filling is the rock pore space. The white grains are quartz SiO2. 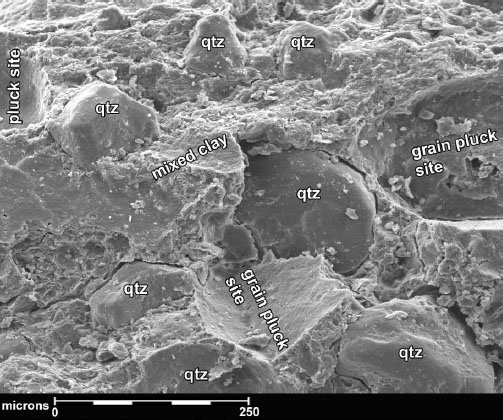 A SEM Scan-Electronic-Microscope photograph of a shaly sandstone


The image to the left shows a SEM Scan-Electronic-Microscope photograph of a tight, very shaly sandstone from a braided channel system.

Notice the big difference in size between the individually visible quartz SiO2 sand grains, and the detrital clay blend, so small that it looks at the shown magnification, as a plastic dough.

However, as seen in the next photograph below, such "clay doughs" have porosity. 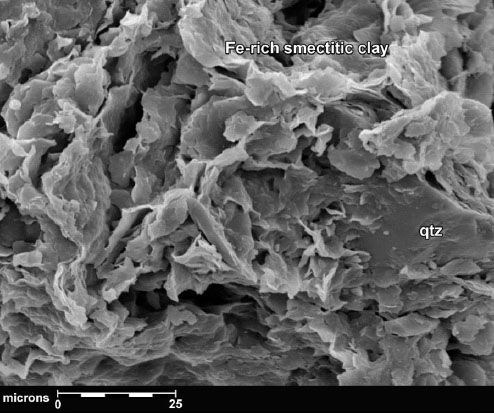 
A SEM Scan-Electronic-Microscope photograph of a clastic, sealing gray shale.

Unless the shale becomes fractured, for practical reservoir exploitation purposes, the rock conforms a seal, with absolute permeability in the order of nano-Darcies.