Any time a petrophysical property is measured in a laboratory, an inherent intrinsic uncertainty error is present. At each depth  xi  i=1,2,...,n , a property  yi  (like porosity) is measured from an extracted core plug. Hence the collection of  {(xi, yi)}, i=1,2,...,n  lab points can be plotted as a log curve for the well. If  y=f(x)  denotes the log curve as a function of depth x, a probabilistic model can be written as:


The problem is to find quantile Q envelope confidence band functions gq(•) that embraces the function f(•) within a known probability. For example: 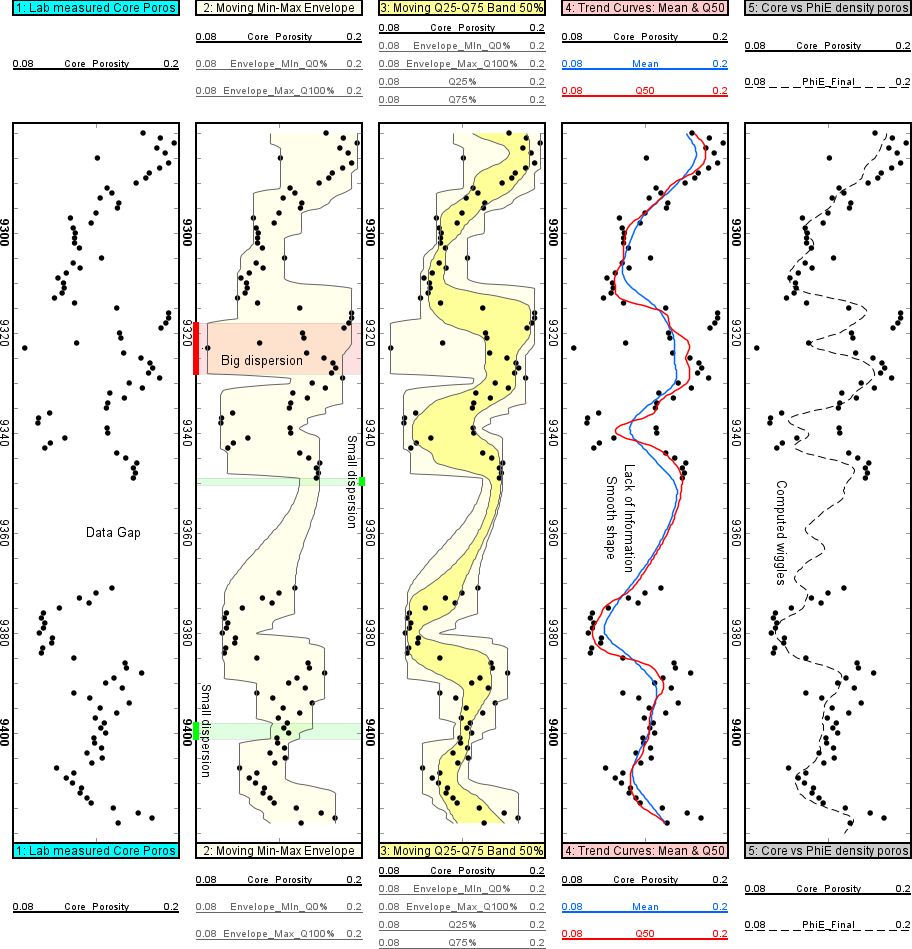 
The method to compute confidence band functions should follow these three principles:

The former three principles are quite general, and discard popular statistical techniques like well known ordinary least squares regression, and even non-parametric kernel regression. If it can be assumed that the variance Var(ε(x)) at a depth x is similar to the variance at the depths in a small neighborhood  x ± h , then the set of the yi measurements that lie between   xi  ∈ ( x - h(x) , x + h(x))   is a local sample of the probability distribution of f(•) around the depth x.


In the log plot shown above, the blue first track shows core porosity measurement values with a large data gap around the depths of 9,360 ft. The pale yellow second track shows a moving 100% confidence band that completely wraps all the core points between a minimum Q0% quantile envelope (the "minimum") curve, and a Q100% quantile envelope curve (the "maximum"). Notice that the band is somewhat jagged, and albeit similar, it is not a convex hull, but an approximate probability confidence band.


The yellow third track shows a moving 50% confidence band, completely embedded inside the wider 100% confidence band. Around 50% of the points lie inside the band. The pink fourth track compares the core data against central trends defined by a Q50% quantile curve, and a moving average curve. Around the 9,360 ft zone of data gap, none of the methods succeed to capture an informative detailed shape, but a general smoothed trend. The gray last track compares the core lab data against a deterministic curve computed by the density porosity equation. Notice how the curve now brings an informative wiggle shape around the depths of 9,360 ft, as it uses log data of the bulk density curve available at those depths.